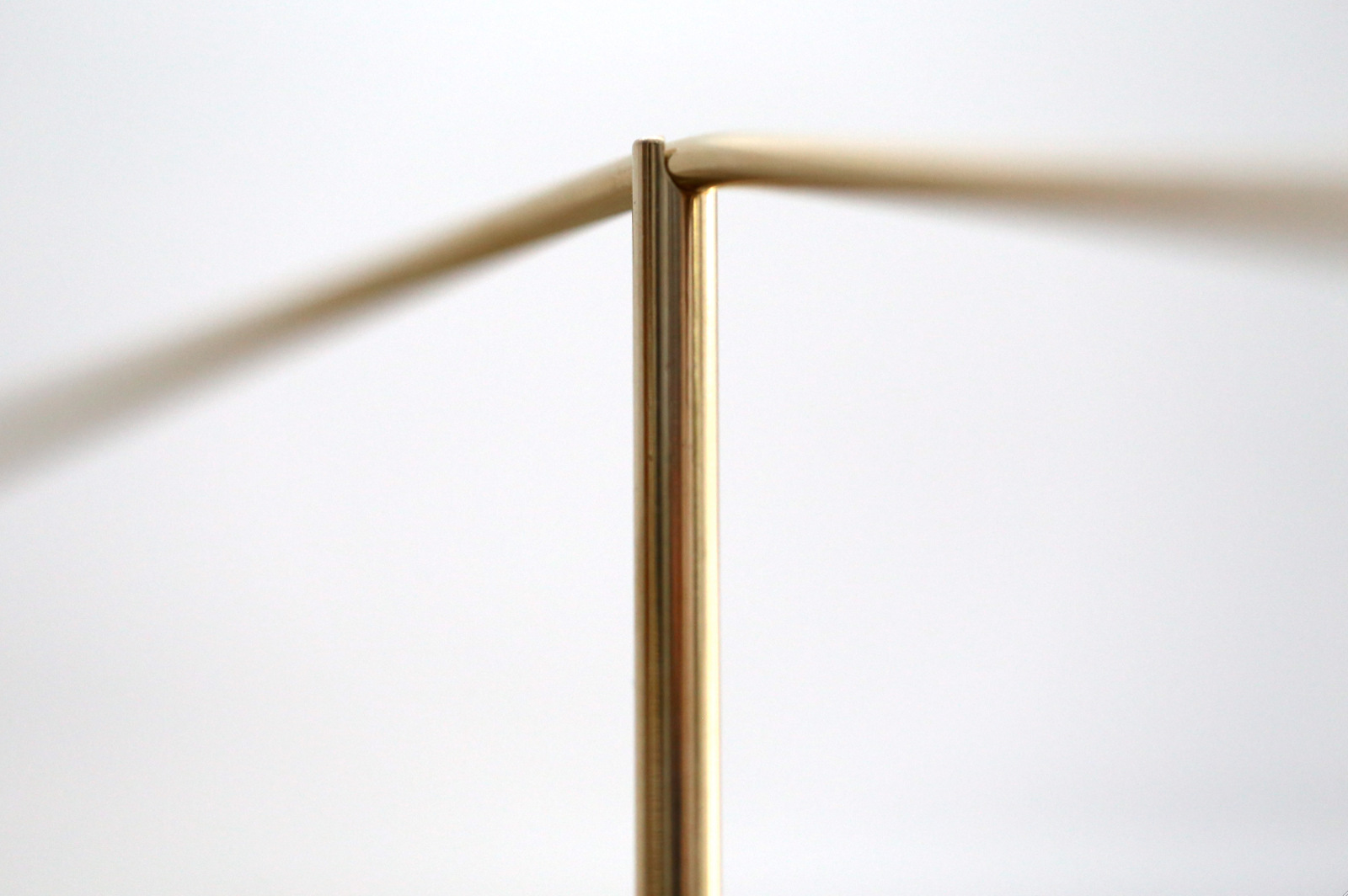 “To a child who is fond of maps and engravings, the universe is the size of his immense hunger.  Ah! How vast is the world in the light of a lamp!  In memory's eyes how small the world is!”

The vaguely Bohemian beauty of objects and bagagges, the powerful horizontality of data and repertoires, the immense emptiness that images create around them filling the horizon of interior silences. Stefano Russo's research is a sort of geometrical immensity; incandescent, obsessive, fragmentary, which explodes between a suitcase and the other, almost giving an impression of arding embers. Everything is subdivided geometrically: parallels, vanishing points, aerial perspectives, all intertwining in the geometry of human relations. An extension of the constructing capacities of the being and its capacities of absence. Stefano seems to want to fulfill the shapes' scheme of division. An extraordinary non-theatrical dramaturgy, which assembles the sharpest shapes to softer shapes; a sort of synthesized poetic of metamorphism in visionary perspective. The mystery of knowledge and some of its elements are condensed here, almost with a sociological approach, both brilliant and unusual in its own way, yet eccentric with respect to the discipline's canons.

All of Stefano Russo's works consider energy. An unabated and infinite reference to the relation empty/full, mirroring symbolic values which suck in and consume things. With the illusion of an infinite symbolic exchange in which reality dissolves, Stefano Russo seems to want to open a glimmer of sense by offering glimpses, thoughts, intuitions and analyses, which testify a constant commitment which has become both a lifestyle and a poetic style. This collection of works presents itself as a story of transition from experience to experience, from observation to observation. It almost has a literary charm in which the accuracy of anaylsis and research combine to the aesthetics of each single object. A “pure travelling” in time and space.

Each suitcase represents a story, a portion of knowledge, a part of the body, a feeling...
Objects which are at times common and others extravagant and precious. Assembled in a symbolic and nonfunctional way, but also in articulate constructions which seem to reflect the intent to penetrate the human sphere. Throughout multiple processes of elaboration, all the objects Stefano Russo collects, assembles and presents also transform into something else: energy conductors in continuous tension with the other elements and with the surrounding space. Suitcase after suitcase, element after element, text after text, object after object, many of them translate into reflections attaining to spheres such as the organic, the body and cognitive functions in the intertwining of different cultural traditions - mostly Oriental - which see the secret of integrity in equilibrium and energetic conservation.

One of Stefano Russo's research characteristics is the desire to approach thematics profoundly engaged to the individual. From history to body care, from the soul to energy, from sensorial to extrasensorial, this is achieved by assembling various materials (many are measurement and optical instruments), all contained in single suitcases which become the possibility of a new cognitive and aesthetical path. For Stefano Russo, contradiction brings to a new space in which it is possible to dialogue, where opposites determine a poetic space in which reciprocity manifests itself amongst different experiences. The elements, the characters and the objects chosen by Stefano Russo, make a move, a swerve, a look, which recalls the presence of an event which has flawed their relation with the world, thus losing the capacity of being identified in a precise role. A research on identity which is pursued through significant experiences which always tend to create a further point of view. An opportunity in which the conditions for vision become possible. A work made of bodies, ideas and positions which favor the transparency of images to the mystification of words, preferring the evidence of representation to the falseness of a mise-en-scene, transforming into a means of a precise and subjective perspective. Stefano seems to be aware that the contemporary often offers emptiness as a possibility, thus he creates artworks as a form of interior breathing. In his work mind and body are never separate and the piece itself is considered as an energy-collecting pole.

The ensemble of this installation is composed of a series of old suitcases and small trunks; representing a symbol for every journey and every exile, of every diaspora and of every exploration. And the journey which Stefano proposes is within the mind and in the human senses. According to Buddhism, the principal body senses are six (sight, hearing, smell, taste, touch, consciousness), but for Stefano even objects, chosen one by one, gain sense: nothing can be an obstacle to beauty. By assembling the objects, Stefano enhances the sense of beauty which derives through the object's existence and history. A journey with no end, an escape through the remains of worn-out objects.

Leather and wooden different-sized, geometrical and regular suitcases, which bare the chance to make any kind of diversity co-exist within. Every suitcase is like a landmark: personal objects, books, instruments, photos. A space made of memories, opinions, impressions on the making of art and on history, on cultures and on cities. More than a comparison on the works, it is a reflection on the individual's identity in an ever-changing, fragile and at times alienating mental space; on the perception of space and of oneself. A sort of diary which becomes a focal point on the criticism of a system which puts people aside in the name of economic and power interests.

The suitcase as a symbol of travel, of departure and of change, but also of the desire to demolish that residual monumentality still inbred in contemporary art. The journey Stefano Russo invites to is therefore a real, virtual, conceptual, utopian or simply hypothetical one. The idea of travel as a chance of an elsewhere, the idea of being here but temporarily, projected towards another condition, at times unknown, nevertheless undefined. But Stefano's suitcase is also baggage, a space for motion but also a memory of what's been lived, and it is the transformation of the viewers into fleeting, transitory passengers.

It is an attempt to recompose an identity between the artwork's mental body and the physical body, between content and form, prerogative identity of symbolic art. An escape towards an unknown destination which is the journey's destination itself: it proposes the salvage of the work's sense of identity between the signifier and meaning. Aesthetical essentialness opposed to redundancy, lightness and adaptability to diverse realities and contexts. Stefano Russo seems to grasp how to transform materialness into mental energy. It therefore becomes clear why the individual and the search for a new balance between natural and artificial is always at the base of his work. Starting from this oppostition, Stefano Russo has created a complex corpus of works which presume an encounter between natural materials and the objet trouvé, a research between objects and world's differing realities. In his works, he assembles very differing kinds of materials, partly depriving them of their intrinsic meaning and their original function to give birth to new instruments which are able to recollect and safeguard the essence of hybrid and different realities. Stefano Russo seems to love every sort of transformation, forging a new destiny for the objects he presents. For Stefano Russo, the presentation and evocation of the memory occur throughout small things: photographs, images, objects guarding individual stories which contribute to a collective and universal story once united.

In his artworks the relation with memory is expressed throughout a sequence of fragmentary lives, of “traces”. Regarding this concept Didi-Huberman wrote: “The unconscious of time reaches us through its 'traces' and it's 'work'. Traces are material: vestiges, historical rejections, counter-motives or counterrhythms, downfalls or irruptions, symptoms or discomfort, syncopes or anachronisms in the continuity of the past's circumstances. In front of this all, the historian must overlook some centuries-old hierarchies – important facts versus insignificant facts – and adopt a meticulous anthropologist eye, being careful to details and in particular to the smallest ones.” (Georges Didi-Huberman, 2007).

According to Stefano Russo, texts, objects, images should be preserved, listened to and also considered on the basis of their reciprocal links. Objects and images should be source of survival and have the possibility to be redeemed, through continuous recoding and search of relations. This insight on looking at time through objects gives the chance to recompose fragments of existence in order to construct a collection of worlds. Stefano believes art is a constellation of fragments and traces, and work after work, he seems to point out a precarious yet balanced temporality, resulting in exhibitions halfway in between an archive and an ethnographic museum. A research, a collection, and an exhibition in which every single fragment of existence recreates a multiple intersection of memory and identity. In Stefano Russo's works small things and common images seize a powerful emotional and evocative role - in the same way relics and repertoires do - as departing points for a journey. The connection between the self and the world is inevitable. Almost as if to underline the ineffability of absence, of a vanishing act, and the memory, this research is also a reflection on the loss of identity through a collecting act, gathering and recycling; a way to narrate life throughout the underlying scrap between architectural compositions and the obsessive centrality objects have, thus creating a geometrical development which generates rigorous harmony, an intimate thought, a memory, an emotion.

Just like Aby Warburg, Stefano Russo strongly believes books and images represent memory materially and allegorically, and that objects are a vehicle and symbol of continuity. Infact, Warburg conceived an 'atlas' of the human expressive potential, enhancing the complex structure of the human cultural code. Warburg's approach to the research's objects wasn't based on continuity or familiarity, but on all which was incongruent and enigmatic, considering each detail as a fragment of an unknown whole. Warburg was interested in all that was tiny and miniscule. He never considered history as a solid heritage, but more as something made of rejections, downfalls, overthrows, references. Similarly, according to Warburg, images and artworks are permeated with information from the memory but also of ambiguity and enigmas.

In this series of artworks, Stefano Russo emphasizes enterprising connections with the typically enigmatic sequence of imagery. Stefano's suitcases and trunks draw closer to the notions of processing, elaborating, collecting, in the same way as Borges' chaotic enumerations or Lullo's “thinking machine”. For Stefano Russo, art is a sort of 'montage' of time, a different regime of temporality, and therefore a contrast of history and memory, a procedure from which it is possible to acquire the idea of an 'atlas', a tool for visualizing knowledge. A hybrid form to organize knowledge, the unexpected or even chaos. 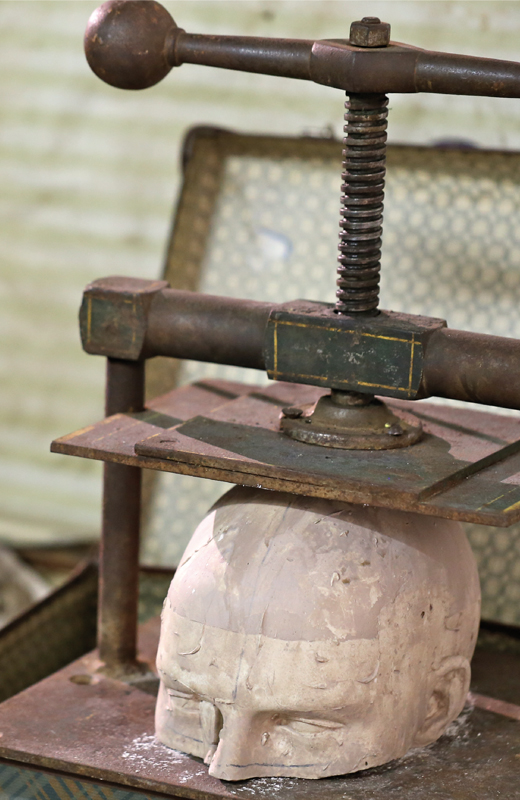 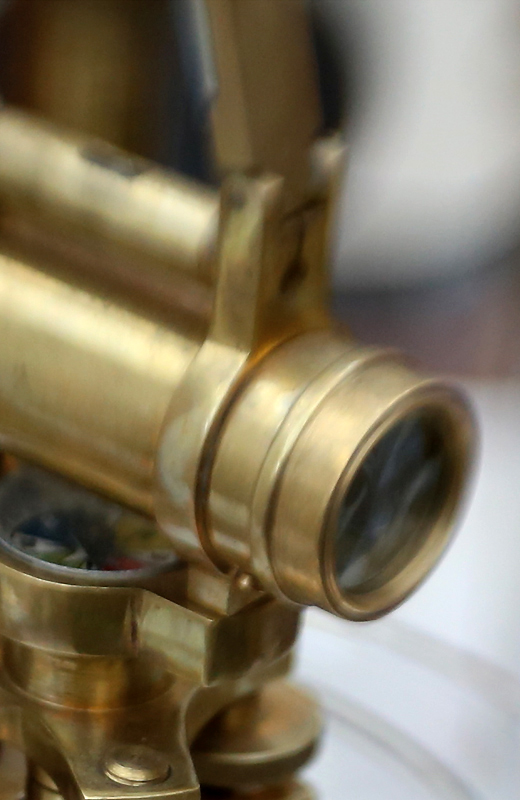 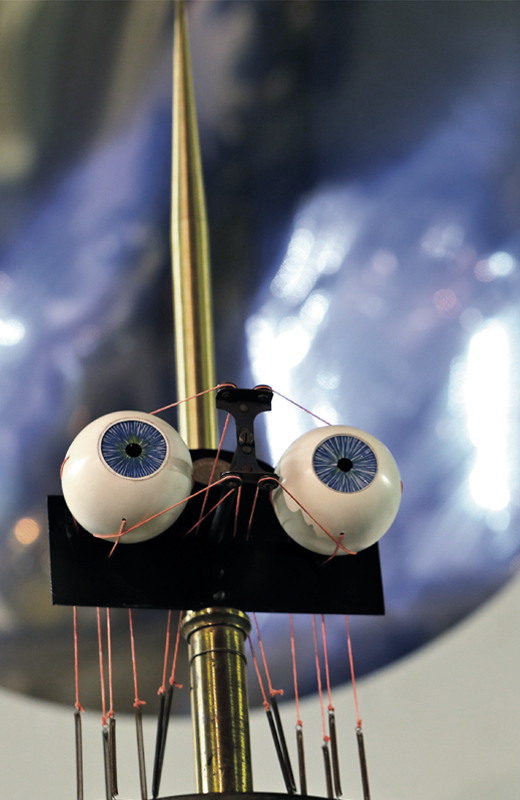 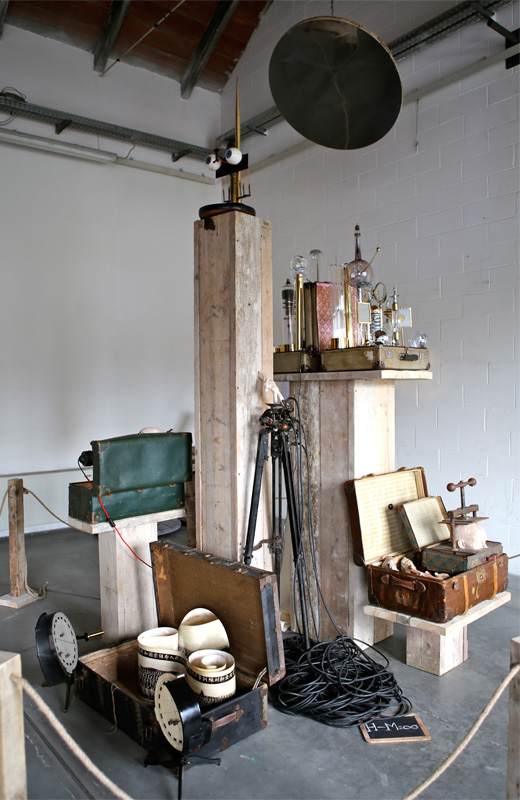 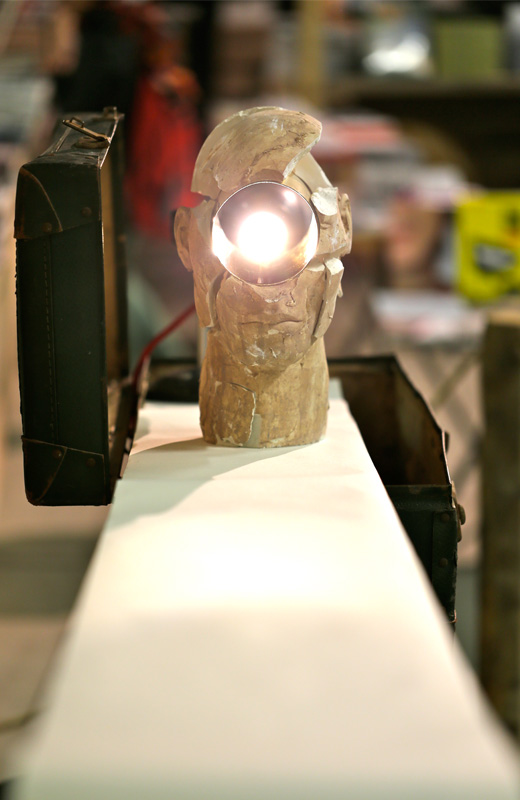 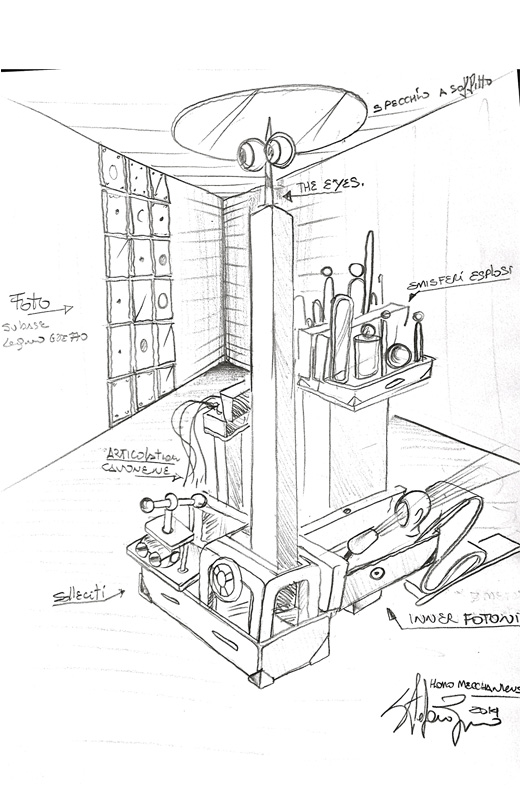 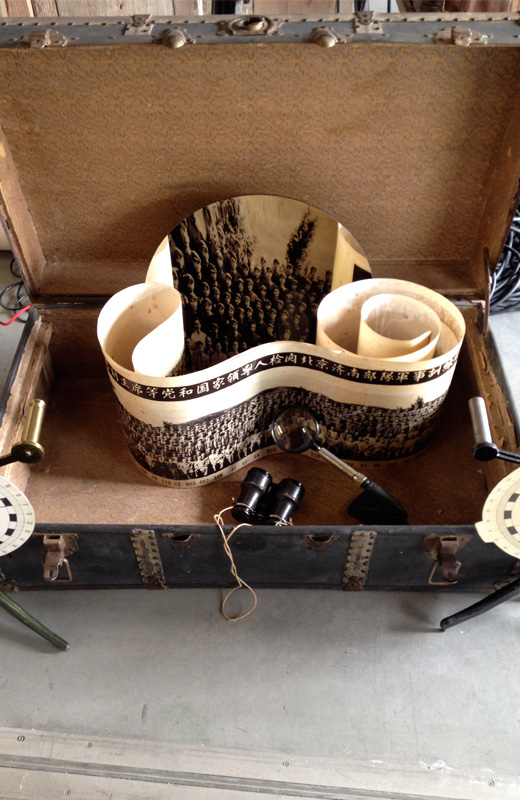 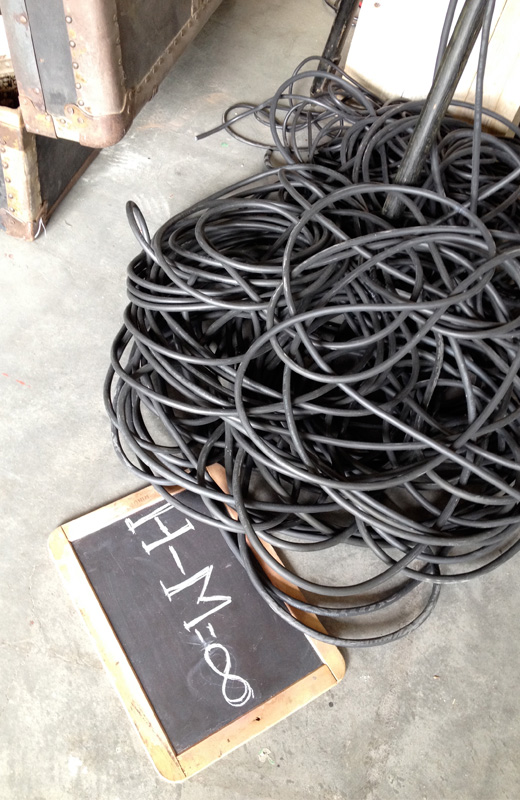 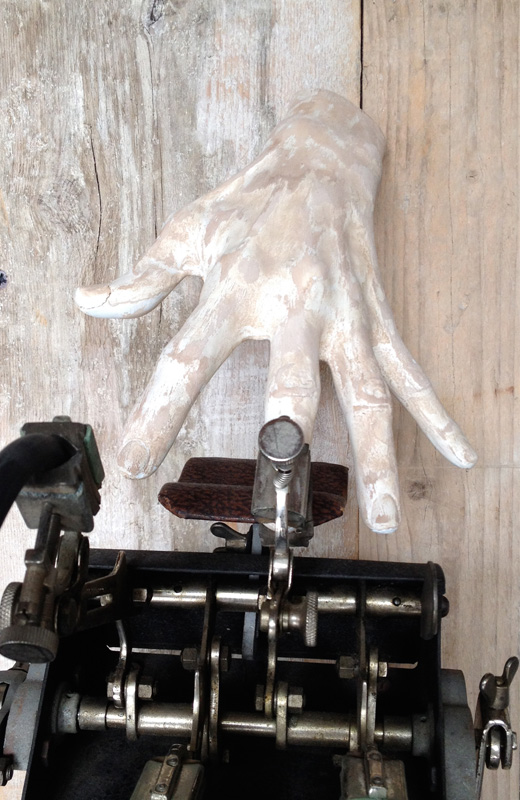 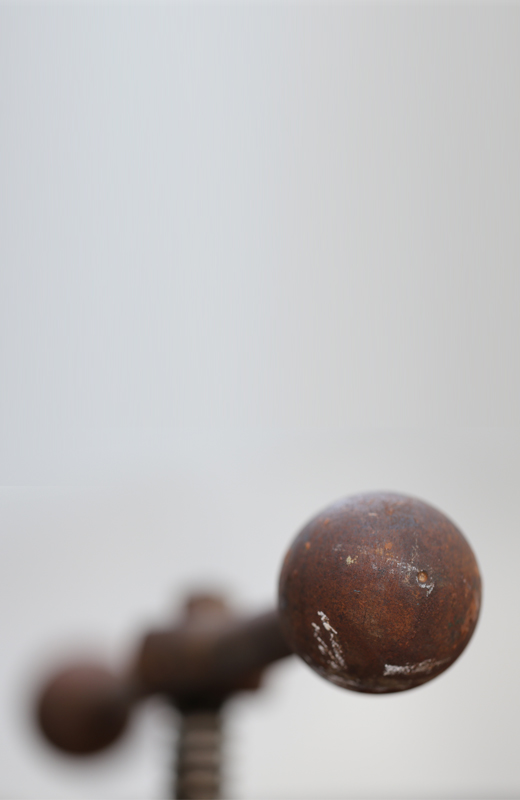